Should I Invest in Dodgecoin (is it Still Worth it in 2022?

This post may contain affiliate links which means we may receive compensation when you click on links to those products. For an explanation of how we make money, visit this page. This just helps fund the site and is no cost to you.

When Dogecoin (DOGE) first came onto the scene, most people saw it as a joke, including its founder. Then suddenly, even Elon Musk was backing the coin, and its value soared. Now though, the price has dropped, and some are wondering if Dogecoin is just a joke after all. You might be asking yourself: Should I invest in Dogecoin, or have I already missed the boat?

Like any cryptocurrency, buying Dogecoin doesn't guarantee huge profits for investors and no individual trade will be the one you can retire on. The path to trading profitably is a long road and it took me a long time to realize what I needed to do to get there.

Still, the success of both DOGE and copycat Shiba Inu coin proves that we can never know what to expect from the crypto market. In other words, we can’t rule out a DOGE comeback. To determine whether it could make a good investment, let’s do some research first - I’ll run through its history and how it works before moving on to a few factors that could make it valuable.

Table of Contents
1
What Is Dogecoin?
How Is Dogecoin Used?
2
Dogecoin Price History
3
Should I Invest in Dogecoin?
Cultural Capital
Profit on Market Irrationality
Elon Musk Backing
Energy Efficiency
4
To DOGE or Not To DOGE?

You’ve seen the meme and probably heard of its unexpected ascent to fame. But what is Dogecoin used for, and where did it come from?

DOGE dates back to 2014, making it even older than Ethereum, which launched in 2015. But unlike most cryptocurrencies, its team never had high hopes of it becoming the next big currency or changing the world. Don’t feel bad if you’ve ever considered it a “stupid idea” because that’s literally why founder Billy Markus created it in the first place.

The crypto protocol was made by copying and pasting the source code behind Bitcoin. Markus claims it took him just three hours to launch Dogecoin and that he did so for a joke. Even Markus sold all his holdings in 2015; he must be kicking himself now.

How Is Dogecoin Used?

When evaluating most cryptocurrencies and digital tokens, I’d take a deep dive into the infrastructure and technology behind the protocol, but that’s not applicable for Dogecoin given its lack of unique features. Since it’s based on bitcoin, in theory, DOGE would be classed as an alternative currency. Plus, Elon Musk recently started accepting Dogecoin as a payment method for Tesla merch, which seems like the use case he foresees.

However, if any cryptocurrency deserves to be accused of being nothing more than a speculative asset, Dogecoin should be the one to take that title. It’s now inspired a whole new category of cryptocurrencies: meme coins. You might know of the Shiba Inu coin (SHIB) already. Still, there’s now a whole host of almost-identical cryptocurrencies, including Dogelon Mars (ELON) and Woof Coin (WOOF), but whether you can buy them on your chosen exchange is another matter altogether!

Still, depending on your perspective, all this silliness might not necessarily be such a terrible thing. More on that shortly. 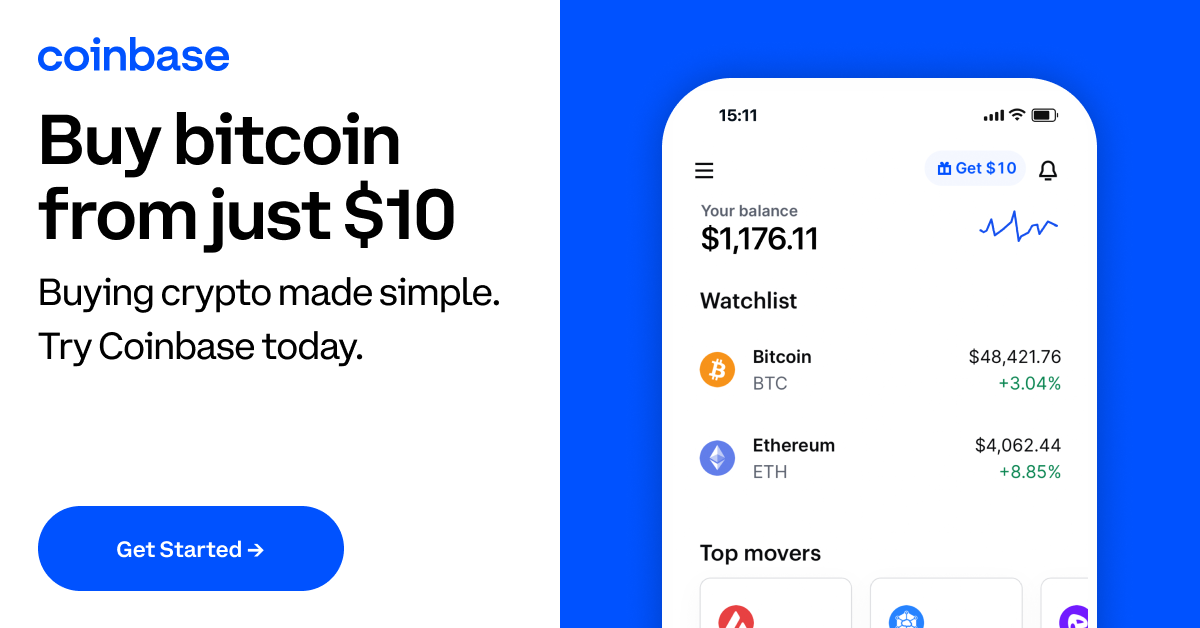 Despite being around since 2014, Dogecoin went pretty much unnoticed for the first six years of its existence. When Dogecoin launched, its price was $0.0002, which didn’t change significantly until 2021. In February 2021, the coin enjoyed what at the time seemed like a big jump up to $0.079.

Little did anyone know that this was just the beginning. In May, it reached an all-time high of $0.67, representing a return of 334,900%. Why, you ask? The entire crypto market was enjoying a boom during this period (like NFTs are seeing now), and many cryptocurrencies benefited from it, so this was undoubtedly a factor.

On May 4, Dogecoin reached a $75 billion market cap. At this point, Elon Musk’s association with the coin began. The Tesla founder tweeted about Dogecoin and gave advocates another reason to be hopeful about its future.

Since then, however, everything has gone downhill. The crypto market as a whole crashed by summer 2021, and DOGE went down with it. In July, its value fell to just $0.17. Although it’s enjoyed a few brief spikes since then, the price hasn’t reached anywhere near its previous all-time high.

But some believe the tide could be about to turn. 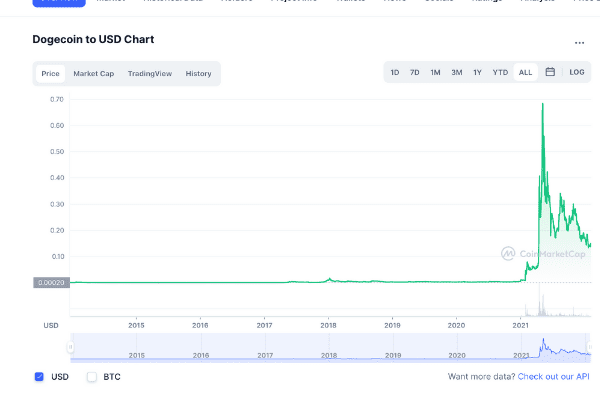 Should I Invest in Dogecoin?

We finally come to the million-dollar question: should you give the dogecoin project your money?

Let’s start on a pessimistic note. Suppose you’re looking for a surefire way to grow your investments. In that case, other cryptocurrencies arguably have more inherent value and should therefore be less risky, not to mention the comparative security of mainstream investments like stocks. Since Dogecoin was only created as a joke and has swung about wildly in price, it’s probably not something at which you want to throw your inheritance.

But if you’re committed to this high-risk but admittedly irresistible coin, here are a few aspects to take into consideration.

If you feel an illogical pull toward Dogecoin that you can’t shake, you’re not the only one. Some might say it’s just a joke. Still, DOGE gained traction by taking inspiration from a meme and using it to give a middle finger to the financial system and cryptocurrencies that take themselves too seriously. After all, if you can theoretically use a coin based on a Shiba Inu dog to do the same thing you can do with a bitcoin or US dollar, it raises questions.

That turned out to be a message people enjoyed getting behind, and the value of this isn’t something that anyone should dismiss. Founder Markus says: “The crypto community can be pretty elitist and not very inclusive, and we wanted to make a community that was more fun, lighthearted and inclusive.”

Dogecoin gives many people a sense of camaraderie; you could even say that it has cultural capital because of how it’s impacted society and brought people together.

Could this be what makes it a success? We’ve also seen people rally around Gamestop and cause a cryptocurrency dedicated to Squid Games to skyrocket in value (though it turned out to be a scam). Don’t underestimate the power of cultural capital.

You can see Dogecoin as a 100% rational movement for the people, or it is the perfect example of how irrational the markets are. If it’s the latter, this could potentially be a way to make money. How?

The markets are always doing crazy things, and once you embrace that fact, you can profit from it. I’m not talking about reading some fancy chart patterns. I’m just talking about observing that mania has begun to sweep the world and recognizing that it’s precisely the type of mania that could lead to a price spike.

However, you’ll need a good knowledge of how to predict investor and human behavior (and the humility to realize you’re not a god if and when you get it right), so it’s not exactly for everyone. 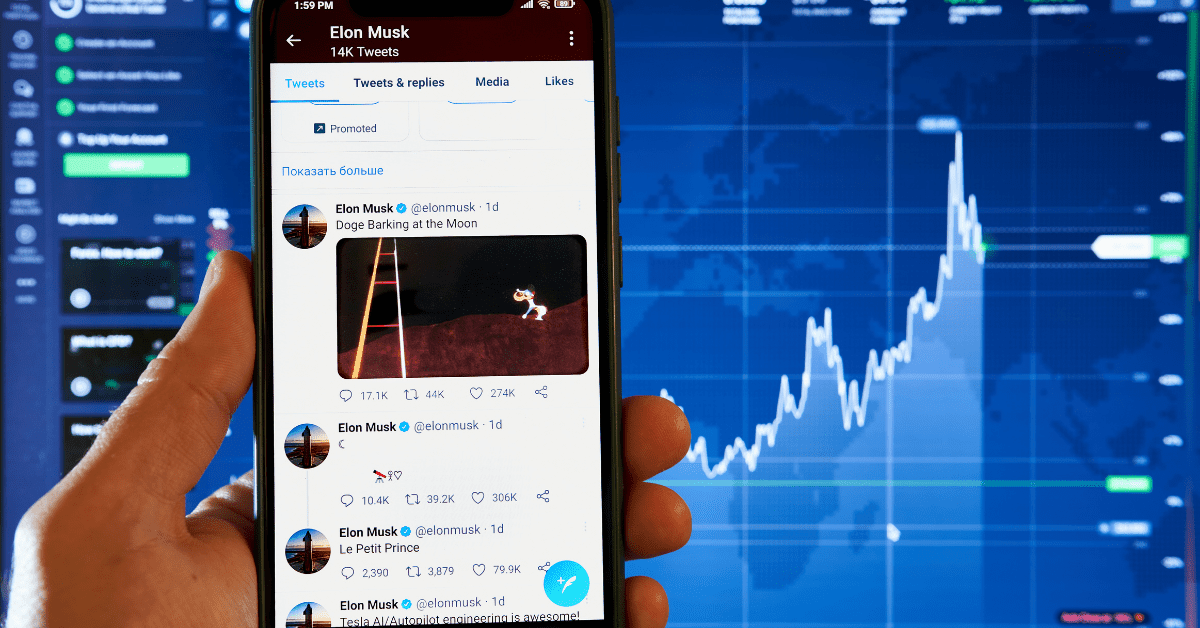 The love affair between Dogecoin and Elon Musk isn’t over quite yet. On January 14, the entrepreneur’s company Tesla started accepting Dogecoin as a payment method to buy its merchandise, with a range that included fashion staples like a commemorative belt shaped like a Tesla factory. Just what you’ve always wanted (but before you get carried away, bear in mind that you can’t receive a refund if you do pay by DOGE).

That led the price of DOGE to jump 15% almost immediately.

Admittedly, buying a limited amount of merchandise for Tesla doesn’t necessarily translate into an extensive use case for Dogecoin. Still, it’s a sign that the currency has some potential.

The energy inefficiency problem of the blockchain world has been heavily publicized over the last year or so. Protocols like Bitcoin can only function because of mining, requiring individuals to solve cryptographic puzzles using increasingly powerful computers. Unfortunately, this squandering of computer power has led to criticism.

However, research has found that Dogecoin is more energy-efficient than most big-name cryptos. While bitcoin consumes 707-kilowatt hours per transaction, Dogecoin consumes just 0.12. That is the case because Dogecoin has some small divergences from Bitcoin’s code, and one of them is moving away from Bitcoin’s mining algorithm SHA-256 to its AUXPoW protocol, which has lower hash rates.

Plus, Musk is allegedly working with the Dogecoin team to make the protocol even more eco-friendly. If you need more convincing to invest in Dogecoin, there you have it.

To DOGE or Not To DOGE?

Whether this tour around Dodgeville has inspired your first steps in crypto investing, or left you more puzzled than ever about why it ever gained success in the first place, hopefully, you’ve learned something today.

Whatever you ultimately decide, we can all agree that Dogecoin’s rise is nothing short of fascinating. Remember like investing capital is always and risk and past performance is not a indication of future. Take care before making any investments and never invest more than you can afford to loose.

This article originally appeared on Wealth of Geeks.

Tim Thomas was born in Guildford and now lives near Southampton, the UK with his family. Tim started his career in the financial markets and has traded and invested in stocks, options, forex, futures, crypto, and real estate for over 20 years. His website, https://timthomas.co/, is dedicated to teaching swing trading strategies for profits, helping traders reach their wealth and financial freedom goals.